Juan T. Vázquez Martín’s career began with formal studies and training in 1957, after winning one of only two prized scholarships, at one 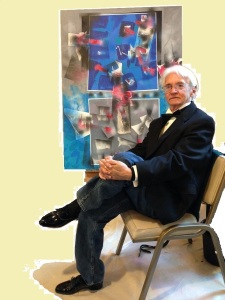 Vazquez Martin with his painting “Blue and Grey”, dedicated to the U.S. Civil War. He painted during Treasure Community Coast Singers and orchestra rehearsals and concerts, Stuart, Florida, May 2015.

of Cuba’s renowned Academies of Fine Arts, the Leopoldo Romañach.

Extending his studies beyond the bounds of his curriculum, he concentrated on Cézanne in particular and soon embarked on his own private journey as a painter under the initial influence of Post-Impressionism.

In the early 1960s, his influences drew most notably on European painters such as Joan Miró and Paul Klee, as well as Jackson Pollock in North America. Further impetus came from Spanish matière painters such as Antoni Tapies and Millares as well as Cuban representatives of this abstract genre such as Juan Ruano and Hugo Consuegra.

These influences were reflected, at the young age of 23, in his first personal exhibition in 1964, held in Havana’s most important art gallery of the time.

He draws on a wide variety of artist’s materials, both traditional and modern, and always takes great care to ensure the durability of his work. Employing well-known brands of base materials, colours and pigment, he often enhances these by the use of various fillers to achieve textured effects; such fillers may be sand or powdered marble, durable and resistant to chemical deterioration. As tools of his art, he utilises everything from bristle brushes to an aerograph, so achieving optical effects of arresting visual beauty.

His art can only be described as ‘abstract’, although abstract in a novel way, reflecting a personality of its own, the signature of an idiosyncratic style.

Throughout his professional career, Vázquez Martín has remained true to his aesthetic concepts. His creations, from whatever period of his life, are at once recognisable by his use of line, colour and transparency, presenting us with his personal view of the universe in a profound and enduring fashion.

Posted to Daína Chaviano (FaceBook Página Oficial) January 30 at 11:18am